It’s tough being the Shoeboxed chauffeurs. Executive orders this morning left some important details out, nonetheless we pulled out the sign: “Shoeboxed.com for Bill Gates” and got to work. We patiently waited by the baggage claim.

For some reason, people were shocked that Bill was coming. People quickly found their movie cameras and filmed away. Others pointed, laughed, and some even pretended not to care, although their eyes were glued to the sign. Head of RDU security stopped us. “You should go check the millionaire’s baggage claim back there!”

Despite the attention we drew, we couldn’t find him in Terminal A or the Millionaire’s baggage cliam. We even checked the restrooms, phone booths, and by the soda machines. So we headed to Terminal C.

In Terminal C, we set up shop at the foot of the escalators by the baggage claim. As people rode down the escalator, jaws dropped, minds were boggled, conversations were dropped. Still, no Bill. 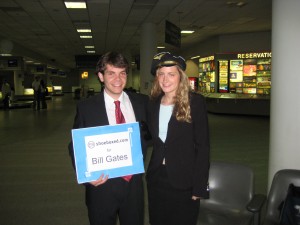 Even though we didn’t find him, we definitely got some interesting looks, and people made some pretty memorable comments.

“Oh my lord… Bill Gates is coming to town? I’ve been filming a YouTube documentary on my trip. Mind if I include this? Also, remind him to support the baby boomer generation of women, when he comes.”

“You must’ve missed the executive airport!”
“No, Bill is a man of the people”-Etienne

“Which flight was he on? I didn’t see him” – Random Traveler
“Really? He was wearing a Shoeboxed.com T-Shirt!” – Etienne

The looks we got were priceless.