We tend to praise Apple around here, not only because they make good computers, but also because they give you the option of getting an email receipt when you buy something from one of their physical stores. We think that’s pretty forward-thinking, and we think that’s cool.

Whatever format you get your Apple receipt in, though, it’s pretty important to keep it. We wrote last summer about how iPhone owners could get a partial refund on their phones after Apple lowered the iPhone’s price. This came with one catch: you had to have your receipt. Shoeboxed users danced in the streets, obviously; they had their receipts tucked away in their Shoeboxed accounts.

Now there’s another high-profile instance from Apple that proves the point about how important receipts can be for getting reimbursed for stuff. Apple is settling a class-action lawsuit about (possibly) defective power cords in their Powerbook and iBook laptops. Read more:

The lawsuit claimed that the Adapter included with or sold for the Subject Computers is defective in that it allegedly “dangerously frays, sparks and prematurely fails to work.” Apple denies all allegations and has asserted many defenses. Apple is entering into this settlement to avoid burdensome and costly litigation. The settlement is not an admission of wrongdoing.

What can you Get from the Settlement?

Apple has agreed to provide a cash payment to Class Members who purchased a Replacement Adapter due to the failure of the Adapter included with or sold for a Subject Computer covered by the settlement and who send in a valid Claim Form. For failures within the first year following the initial retail purchase of the Subject Computer, the settlement requires that you attempted to have the failed Adapter replaced or repaired under warranty by Apple and such request was denied by Apple for a reason other than user abuse.

The settlement provides for different cash payments depending on when the Adapter included with or sold for your Subject Computer failed.

The settlement only applies to a Replacement Adapter purchased during the first three years following the initial retail purchase of the Subject Computer, and before May 31, 2009.

It’s unclear what exactly you’ll have to prove about your purchase of the replacement adapter, but I’m guessing they’ll need to see that receipt. I don’t have a Powerbook, but I’m saving my MacBook receipt for a rainy day… in Shoeboxed. 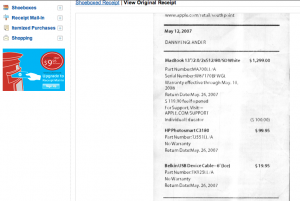