In this Brave New World of wireless connectivity, it’s somewhat ironic that basic human interaction in the workplace has steadily decreased over the past decade. Skype and FaceTime have replaced face-to-face meetings, it’s often easier to get a question answered using text message than it is to walk down the hall, and even I’m guilty of g-chatting with co-workers who share the same desk space as me. 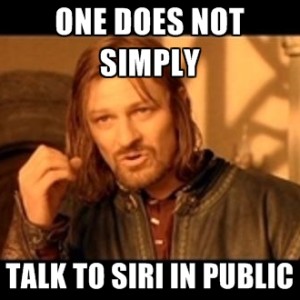 While there is much to be said both for and against these new forms of connectivity and how they affect people’s work habits, the information era of the 21st century has ushered in a significant decline in simple forms of traditional human etiquette, especially in the professional world. While there is no arguing that technology can make you more efficient at your job, there are many things that have and always will require a human touch.

Here are four ways to ensure that no matter how dependent you become on your  iPhone, you never forget to include the seemingly long-forgotten human element in important areas of your business life.

In a world where people receive 50-100 emails a day, it is that much more important and effective to write and send real thank you notes. A thank you email is good, but a thank you note will have twice the effect and will never get accidentally overlooked or caught in a spam filter. Whether it’s a client, a future employer or a fellow co-worker, writing a real thank you note sends a clear message to the recipient that you’re not only grateful, but are willing to take five minutes out of your day to express your gratitude in a way that none of the other 5,000 people in his or her inbox bothered to.

A thank you note is timeless, and in 2012, it’s more important than ever to invest $25 in some stationary for your company and/or yourself. Trust me, the recipient of a real thank you note will remember the gesture for a long time. As a bonus, who doesn’t like opening the mailbox and finding a letter to open?

2. Email signatures are great, but…

Email signatures are great, and as a marketer I can tell you that they serve a very real and important purpose in the branding of your business. Not to mention it’s definitely the fastest free way to get your name—and your company’s name—in front of as many people as possible on any given day. However, there’s a caveat. Like many “set it and forget it” options, it is obvious that any email that says “Thank you,” followed by your name, title and your company’s logo has not been written in any personal fashion. While this is fine for co-workers, if you’re contacting anyone outside of your organization, I think it’s wise to end the email on a bit more of a personal note. Even something as simple as, “Have a great weekend” or “Looking forward to seeing you tomorrow” can make the difference between an email that someone spent time on versus one that has been essentially copied and pasted a thousand times over.

Email by its very nature is a very impersonal way of contacting someone, so this is all the more reason to personalize your emails as much as possible, when appropriate. Does it take an extra split second and an ounce of brainpower? Yes. Does it make a difference to the person receiving the email? Absolutely.

3.  Replace your laptop with a notepad

No, I’m not suggesting you actually throw out your computer and replace it with a notepad. However, there are times and places when you simply don’t need your laptop, your tablet PC or whatever technological device you keep with you around the office. If you’re attending a meeting, ask yourself if you will actually need your computer. Unless you’re making a presentation, more often than not you will not need it. Instead, go the “old fashioned” route and just take a notepad to collect meeting notes. If necessary, you can transfer physical notes over into digital form after the meeting (or you can use a service like Evernote, which will do this for you), but during the meeting you will undoubtedly be more attentive to the other people around the table.

Even if it’s deemed socially acceptable to bring and use your computer in a meeting, the fact of the matter is that it’s a distraction that will make you less productive. And since you spend hours on your computer every day anyway, take some time during face-to-face meetings to fully engage with the other people in that meeting. By not bringing your computer to a meeting, you are sending a message to everyone else in the room that you value their time and are there prepared to engage with them on a more personal level.

4. Don’t be antisocial on social media

Social media is all the rage, and it certainly can be a powerful tool for your business when harnessed properly. If your company doesn’t have a Facebook page or isn’t on Twitter, these are two things you should rectify quickly. One of the best things about social media is that it’s a great, free way to send a message to many people at once. However, do not forget that social media channels can and should also be used to connect with people on an individual level. You can set tweets and Facebook posts to be sent out every hour for the next month, but nothing will replace a personal response to someone who tweets something favorable about your company or service. Don’t just re-tweet praise on Twitter, take the time to tweet back to the user thanking them for their time and business. The same applies for Facebook, where it’s vital that when someone posts on your timeline, you respond promptly and with a sincere message. Whether it’s a question, a complaint or just praise, ensure that people who engage with you know there is a real person on the other side of the digital chasm.

Real human interaction is that much more vital when there is a degree of separation between you and the person with whom you’re speaking. Use social media as a loudspeaker for your business, but don’t overlook the people who hear you broadcasting your message and come knocking on your door.

Technology has made us more connected, more efficient and arguably more productive in the workplace. But remember, no matter how advanced Siri becomes, she will never be able to hold the door open for someone.