Learn how corporations use international transfer pricing and tax inversion to lower their corporate income tax. 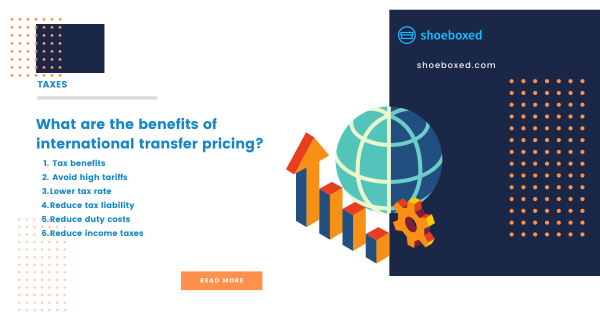 We cover the corporate income tax strategies that corporations often use that you should know about.

What is international transfer pricing?

In other words, they strategically place operations in low tax-rate countries.

What are the benefits of international transfer pricing?

When a company is able to provide accurate transfer pricing documents, it is eligible for a number of tax breaks that allow it to avoid paying taxes in many countries.

By sending goods to nations with high tariff rates and employing low transfer charges, transfer pricing helps to reduce duty expenses by lowering the duty base of such transactions.

Transfer pricing ensures profits for products and services in many countries with a lower tax rate.

A transfer pricing document serves as a foundation for calculating the entire cost of association between two organizations, which aids in the avoidance or reduction of tax liability.

In international trade, duty costs are a significant challenge. You will have to deal with such costs on a regular basis if you run a worldwide corporation.

Organizations can also significantly cut their income taxes in nations with high tax rates. This is accomplished by overpricing the items being exported to countries with lower tax rates.

As a result, overall profits are balanced, and enterprises can make more money.

What are the risks involved in international transfer pricing?

According to the Corporate Finance Institute, Google is a good case study of how a big corporation employs the international transfer pricing strategy.

What is tax inversion?

Another strategy that corporations can use to decrease the tax rate is to move their legal headquarters to a location with lower tax rates.

What are the benefits of tax inversions?

What are the risks involved in tax inversions?

You need to work with tax and legal consultants who have completed inversions in the country where you seek to re-incorporate. Tax inversion isn’t a “do-it-yourself” undertaking.

2. The danger to shareholders.

It’s also crucial to consider any potential tax implications for your stockholders. You’ll be trading shares in the old firm for shares in the new one when you incorporate. Shareholders may face severe tax repercussions if it is not correctly constituted.

3. The danger of making the front page.

In addition, tax inversions aren’t widely discussed in the media. Despite being fully legal, opponents contend that the practice is unpatriotic and unfair. While it’s doubtful that Congress will adopt new legislation prohibiting tax inversions anytime soon, the U.S. Treasury Department is considering what steps it may take to discourage them further in light of recent media attention.

According to the American For Tax Fairness Organization, Walgreens, which had $72 billion in U.S. sales in 2014, inverts with a Swiss corporation and will likely save $4 billion in U.S. income taxes over the next five years. If Pfizer was successful in its attempt at an inversion with AstraZeneca in the UK, it would have saved $1 billion a year in taxes in the US.

So, do large corporations abuse these tax rules to evade legitimate income taxes? This is up to national governments to decide.

One example of the relationship between the government and corporations regarding tax inversions is the U.S. government’s policy on reporting income arising from intellectual property.

You can stuff your receipts into one of our Magic Envelopes (prepaid postage in the US). Use our receipt app  (iPhone, iPad and Android) to snap a picture while on the go. Auto-import receipts from Gmail. Or forward a receipt to your designated Shoeboxed email account.

Turn your receipts into data and deductibles with our expense reports that include IRS-accepted receipt images.